Known for its casinos, boardwalks, and beaches, Atlantic City, New Jersey, is an ideal place to kick off an aerial advertising campaign. Considered the “Gambling Capital of the East Coast,” Atlantic City has over 28.5 million visitors a year, many of which spend their time outdoors walking the oldest boardwalk in the United States.

We have been in the aerial advertising business for over six decades and our pilots are well-versed in flying the Atlantic City landscape and the surrounding areas. In fact, many of the biggest casinos in the area choose Van Wagner Aerial Media for their aerial advertising needs.

We also offer the largest, most-vibrant, and durable airplane ads in the industry. Capable of withstanding a minimum of forty flights, our aerial banners are built to last. Upon producing your aerial billboard, remember your airplane ad is an investment capable of being flown multiple times of year in various markets across the United States.

Van Wagner Aerial Media provides a variety of aerial advertising services to small, medium, and large brands looking to fly above the clutter on the ground below, and really stand out in a crowd. Airplane Advertising – We offer a variety of banner sizes to our clients. We want to ensure that your ad is exactly what you have in mind. The messaging on your aerial banner can also be changed and tailored to the location you are flying. Ask us about our removable snipes if you are looking to fly multiple locations. Van Wagner Aerial Media provides expert service in the area of airplane advertising, and will ensure your campaign is executed to fit and exceed your expectations.

Sky Writing/ Sky Typing – Our sky writing and sky typing services are known for creating viral-like buzz. With sky typing, 5-6 planes fly in formation while spurting small dots of environmentally-friendly smoke. The dots eventually form a matrix of letters that spell out a brand’s desired message. Big names like GEICO, Taylor Swift, and Uber have utilized sky typing to get the attention of consumers in high foot-traffic areas. Sky writing involves a single plane performing a serious of loops and twists to spell out a word, or draw and image. Van Wagner Aerial Media’s highly trained pilots are capable of performing both of these eye-catching air spectacles.

Helicopter Banners – Capable of eclipsing the sun, our helicopter banners are some of the biggest in the industry. It’s human nature to look up when you hear a helicopter flying overhead, and consumers are delighted when they find a massive billboard floating in the sky above. This disruptive form of aerial advertising has been used by our clients to create buzz in some of the biggest markets in the United States. We also offer helicopter stunts, where an individual hangs from the helicopter to promote a specific brand or product.

Which Event Is Right For My Aerial Advertising Campaign In Atlantic City?

If you have questions about the cost of a banner towing plane in Atlantic City or any other inquiries, please don’t hesitate to contact us today. Or click below for your free aerial advertising quote! 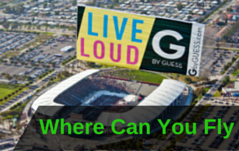 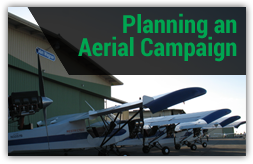 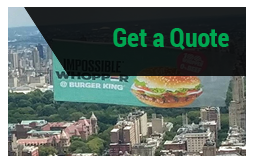